In a landmark in paediatric oncology research, children with high-risk neuroblastoma across Europe and North America will be treated together for the first time, following the award of $1.3M to fund a new trans- Atlantic clinical trial led by Dr Yael Mossé of Children’s Hospital of Philadelphia and Dr Dominique Valteau-Couanet of Institute Gustave Roussy in France, investigating the ALK inhibitor Lorlatinib in the treatment of children with newly diagnosed high-risk neuroblastoma, a deadly childhood cancer that mainly affects children under the age of five.

“We are proud to be driving forward innovation to provide new hope to children and families shattered by a neuroblastoma diagnosis, and are thankful to members of the research community who stepped up and came together to meet the spirit of our challenge grant call.

“Making the first ever study of this kind a reality stands as a testament of what passionate like-minded charities and non-profit organisations can do if they come together for the greater good. International collaboration is vital to move things forward rapidly for children.” Nick Bird, Research Director at Solving Kids’ Cancer UK, Speaking on behalf of the group of funding partners.

The new study will be integrated to form part of the ongoing COG and SIOPEN Phase 3 high-risk neuroblastoma trials, and will involve children at Children’s Oncology Group hospitals and SIOPEN institutions across Europe and the UK having their tumours being tested for mutations in the ALK gene when they are first diagnosed.

Such mutations are found in around 14% of patients and represents a group of children who currently have inferior outcomes with the existing multi-modal treatment regimen. Children whose tumours are found to have ALK mutations will soon be treated with the addition of Lorlatinib, a third-generation ALK inhibitor manufactured and supplied by the pharmaceutical company Pfizer. 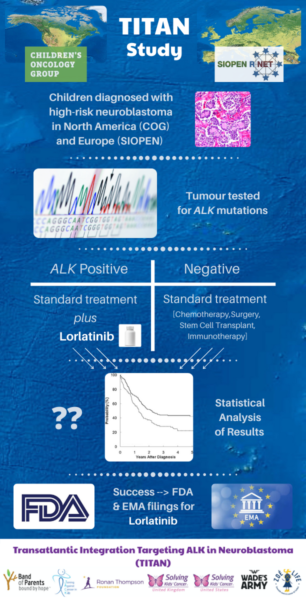 “The SKC 2018 RFA has been an enormous catalyst for international collaboration. The Lorlatinib trial itself is a landmark in clinical research for children with neuroblastoma. The approach is a paradigm to individualise therapy and can be a prototype for other molecular sub-types which ultimately will result in widespread benefits for all children with this cancer.” Professor Andy Pearson, Chair of Solving Kids’ Cancer Scientific Advisory Board